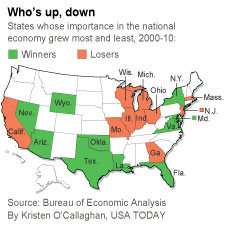 Texas became the USA’s second-largest economy during the past decade — displacing New York and perhaps heading one day toward challenging California — in one of the biggest economic shifts in the past half-century.

The dramatic realignment of the nation’s economy was illustrated by North Carolina, Virginia and Georgia all overtaking one-time industrial powerhouse Michigan in economic size from 2000 to 2010. The economic winners of the last decade are states that focus on raw materials, government and senior citizens. The big losers are places that make things — industrial states and even California.USA TODAY examined each state’s gross domestic product to determine how the country’s economic output has shifted within its borders. The data, recently released by the Bureau of Economic Analysis, reflect both population growth and income increases — in short, the economic weight of each state.Texas notched one of the biggest increases in size in a half-century, surpassing $1 trillion in annual economic output. The state gained nearly a full percentage point in its share of the U.S. economy during the decade, reaching 8.3% in 2010. This growth in economic clout has been matched only twice in the past 50 years — by California in the 1980s and Texas itself during the 1970s oil boom.”We’re growing faster than everyone else, and this trend should last a good while,” says economic forecaster Raymond Berryhill of Waco, Texas. His state enjoyed “good fortune and good planning” from having natural resources, immigration and successful technology businesses while avoiding the real estate bubble, he says.

Florida’s share of the national economy grew more than any state except Texas as seniors took their wealth south. But it was the long-booming state’s smallest growth of any decade since the government began keeping track in the 1960s.Other ups and downs:•California. The state’s share of the national economy peaked in 1990 but shrank faster than all but three states from 2000 to 2010. It’s hard for a large economy — at $1.9 trillion, the nation’s largest — to keep growing fast, especially when hit by a housing downturn, says Stephen Levy of the Center for the Continuing Study of the California Economy. •Virginia. The federal government-fueled suburbs of Washington, D.C., led this state and neighboring Maryland to a decade of prosperity.•Michigan. Michigan and Ohio were the only states to end the decade economically smaller than when it began. “Michigan was the place that created the 20th-century middle class — the well-paying factory job,” says Lou Glazer, president of Michigan Future, an economic research group. “It ended so quickly we fell off the cliff.”